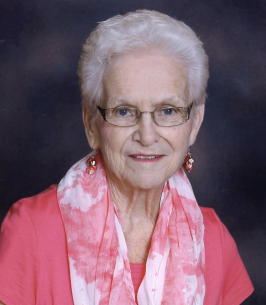 When Agnes Gaffney (then Agnes Kelly) came into the world in 1933 there were plenty of people to welcome her. She was the 10th and last born to TM and Margaret Kelly of Kinkora. The Kelly’s were a close bunch and Agnes stayed great friends with her six sisters and three brothers throughout their lives. She was the last surviving of her siblings.

Generations of school children knew Agnes as Mrs. Gaffney. Her first teaching job was in a one room school teaching eight grades at once. She didn’t like it at first, but her father convinced her to stick it out until Christmas. By then, she had the hang of it and never looked back. She retired from the Huron-Perth Catholic District School Board at age 65 ending her career as a grade 3 teacher. With so many former students, it wasn’t uncommon to cross paths with them years later. Whenever she said “I used to teach him/her” there always seemed to be a bond of mutual affection and respect.

Agnes married Harold “Charlie” Gaffney. They had a farm in Logan Township and raised their five children there. Agnes was an active partner in whatever needed to be done on the farm from milking cows to operating farm machinery. When people asked her if she was taking a course during her summer off from teaching, she used to joke “yes -- a course in baling straw!”

When Agnes eventually became a grandmother, it was "grand" indeed.  She passed on more love and lessons and was a great friend to her grandchildren.

Agnes volunteered her time with Meals on Wheels, the Cancer Society, the library board, and the tourist information booth. She donated her dollars to help children and families in developing countries and homeless urban youth.

Agnes was strong, wise, welcoming and reassuring. In her 88 years, she experienced many joys and celebrations, lots of laughter and much love. She also knew loss and disappointment. During difficult times, Agnes never lost her faith or her sense of humour. She always kept perspective and reflected that things could be worse.

All rights reserved. This obituary is also archived at obittree.com